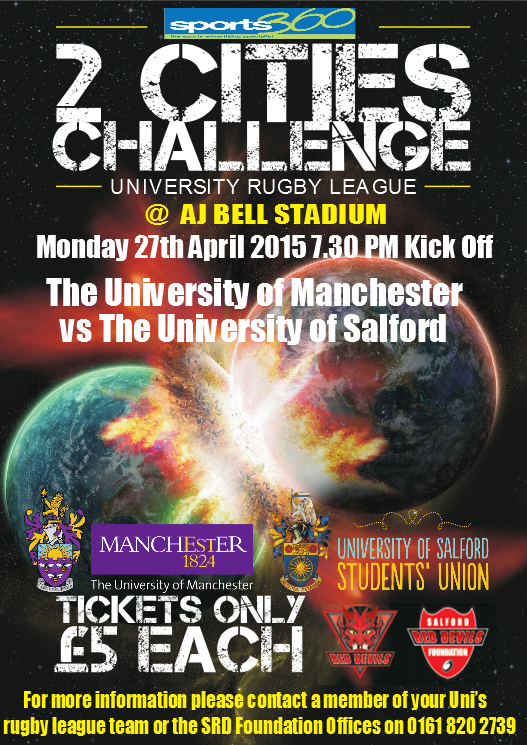 A very competitive game seen University of Manchester take the two cities challenge for 2015. After a fast start Manchester took an early 18-0 lead in as many minutes, this spurred Salford on who managed to get some points on the board with 2 quick try’s after some weak defence from Manchester.  After a few handbags early on, the game settled in to a close contest but with 2 late first half try’s it was Manchester who took the lead at half time 28-12.
The second half was a complete opposite from the first with a serious injury to a Salford player seen the game halted for 30 minutes. This seemed to drain the game and both teams struggled to find their form of the first half. With 15 minutes left to play Manchester managed to squeeze in the corner to take the score to 32-12. Another serious injury this time to a Manchester player, and with 2 minutes to go the referee blew the final whistle thus crowning University of Manchester winners of the game.
Lewis Lockett, University of Manchester Head coach said “From the start we knew it was going to be a very physical game and the lads got off to the best of starts. Everything we had been working on in training came together at the right time and was easily our best performance of the year. Although the second half was halted due to injuries both teams played out a very exciting game which I’m sure the crowd enjoyed”
Danny Doherty