Salford Red Devils captain Adrian Morley started the 2014 Salford School Run as almost eight hundred children from across the city ran the two thousand metre course around the AJ Bell Stadium. The annual event, organised by School Sport Partnerships in Salford was held at the stadium for the first time. Salford Reds Foundation offered their staff to act as marshals and helped cheer on the runners. 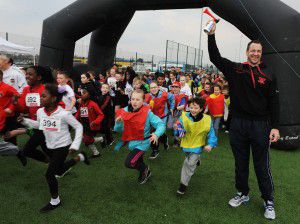 The event was also open for parents, teachers, grandparents and even some toddlers in buggies completed the course. The largest contingent was from Springwood Primary and Jeanette Woodward from the school said: “Thanks for today. The childrenand adults loved it and were so proud of their medals. Those that couldn’t make it to the stadium have completed their own 2k course back at school.” 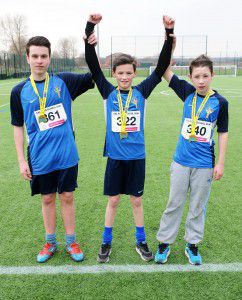 The first runner to cross the line was Daniel Sixsmith from All Hallows RC High School, much to the delight of former pupil Adrian Morley. Adrian said: “It’s great to see my old school taking part today and to see so many talented athletes in action. It’s also been great to see mums and dads here joining in the fun and taking exercise as families.”

Dean Gilmore who organised the run said: “Although numbers were slightly down from the last event, we’ve had more schools take part this year than ever before, including several for the first time. The weather also held for us this year and we are very grateful to Adrian for giving up his time to support the event.”