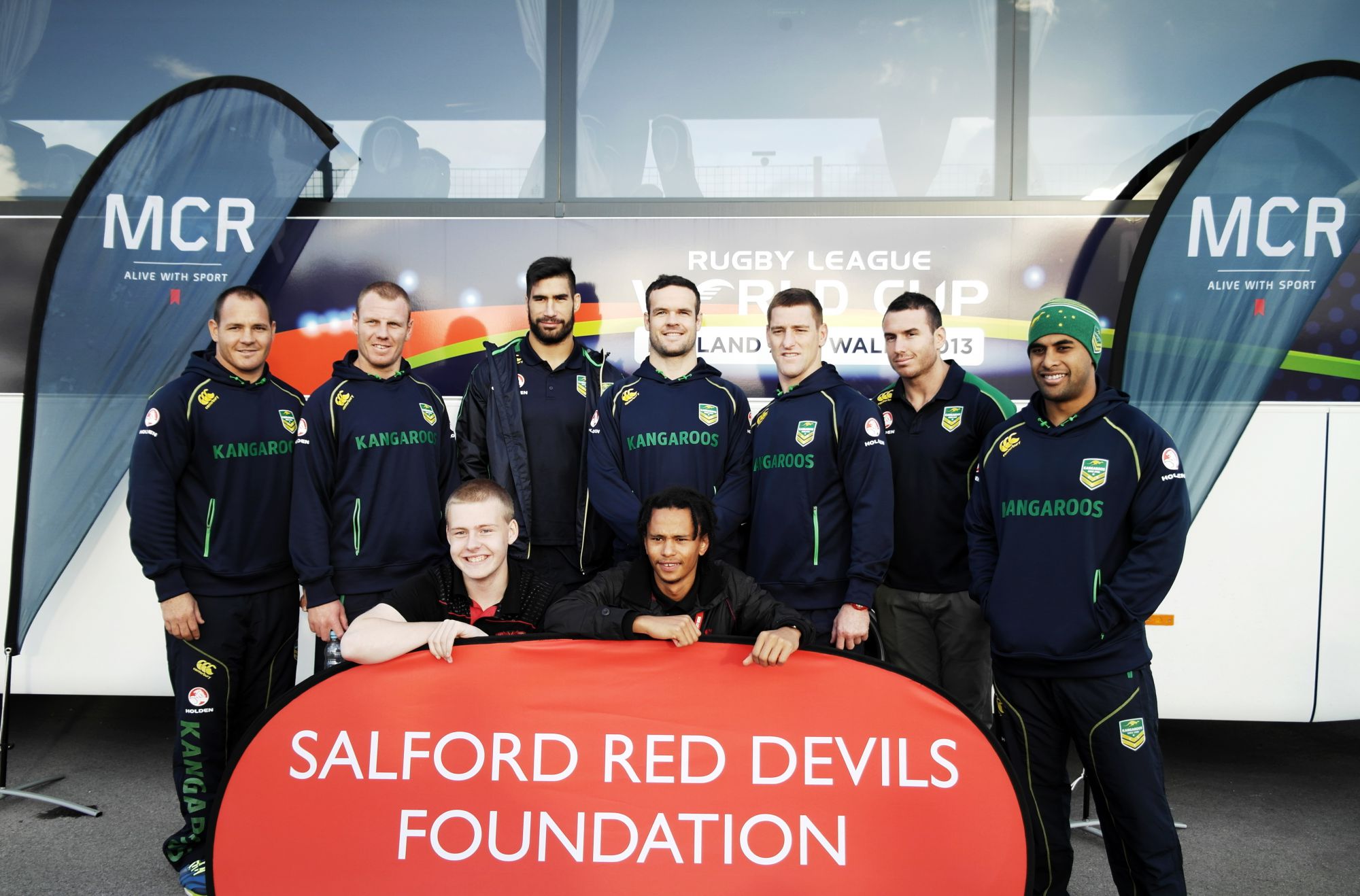 
Kicking off at midday a full family of SRDFoundation community teams from across Salford and the North West  were in attendance for this once in a lifetime experience.

School teams representing St Peter’s, Manchester University, Manchester Metropolitan University, Salford University, Oasis Oldham, Oldham 6th Form College, as well as community teams including the East Manchester Rangers, Folly Lane, Cadishead and the North Trafford Titans, were all there; raring to go and keen to receive any pointers and tips from the games leading international stars, as well as partake in training sessions and a series of touch rugby tournaments.

Supported by SRDFoundation Community Coaches, a strong representation of Australia’s Rugby League World Cup squad were on hand to lead the session, meet local Rugby League enthusiasts and pass on wisdom, experience and advice to the young players, benefitting from working with established international stars.

Australia Internationals James Tanou, Luke Lewis, Brent Tate, Matt Scott, Darius Boyd, Michael Jennings and Nate Myles led the 250 rugby league players through their paces as 150 or so parents and other sports enthusiasts looked on, eager to soak up the atmosphere of watching the World Cup favourites coaching and showing off their skills.

Community Coach Danny Doherty, taking the session for Folly Lane and Cadishead with Luke Lewis was keen to utilise the International’s experience in the passing and kicking coaching session. Danny said, “The enthusiasm from our community teams to come and get involved today has been overwhelming. Seeing stars of the game who may well lift the World Cup in a couple of weeks do their thing up close has been really special, and we hope that community team members have taken something out of the day.

“To get a crowd of almost 500 on a Tuesday afternoon really says something about the calibre of the event, and we’d like to thank the Aus Kangaroos for coming down and meeting everyone and we wish them all the best for the remainder of the World Cup”.

Kangeroos spokes person was also keen to add their thoughts, saying “Our boys we’re very happy to get involved and couldn’t believe the reception they were given. It was a well organised day and the enthusiasm of the coaches, kids and community members was great. An absolute pleasure to get involved”.

With the World Cup now in full swing, it isn’t too late to experience the event with a series of activities going on in the run up to the final at Old Trafford on November 30th. For information on Tickets for USA Vs Scotland or WC Final hospitality, please contact Des at the Foundation on 0161 820 2739.